Posted on February 24, 2019 by everydaywithgodgracechurch

What you will read over the next several days are stories of lives that were radically changed by the grace and work of God.  From Noah in the Old Testament to a nobleman in the New, from Joseph in Egypt to a jailer in Philippi, we will trace the lives of people in whom the work of God is evident.  But, these men and women are like you and me.  They were imperfect.  Still, God transformed them, bringing the kind of changes that He wants to bring in you.

But today’s character is different.  Oh, it’s true, he was made in God’s image, just like you.  Nevertheless, Adam was different in that God created him from dust.  He was not birthed through the union of a man and woman the way you were.  And, in contrast to you as one identified as a sinner from the point of conception (Ps. 51:5), this first man was initially without sin.

That’s where this man’s transformation begins.  Unlike the others in this serie we will highlight, his is not a story of positive transformation.  His is a transformation from a state of sinlessness to one of sinner.  His is a story of transformation where work became…well, WORK with all of its corresponding blood, sweat, and tears.  As he ate from the tree, his union and communion with the God of the universe was changed to separation and animosity. 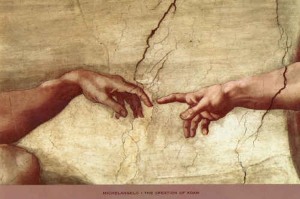 Thankfully, there is One, however, who was born of a virgin.  Gratefully, there is One, who has been tempted in every way like us and is yet without sin (Heb. 4:15).  Praise God, the Father has provided His perfect Son who offers to transform our sinful lives into ones that bring Him honor!

This entry was posted in Genesis, Transformation Testimonies. Bookmark the permalink.