Posted on March 5, 2019 by everydaywithgodgracechurch

He told the sailors he was a child of God. Jonah even claimed he worshiped the One True God. Still he ran, trying to avoid God’s way of doing things.

The Hebrew word for worship here means fear, as in I fear God, the One who created the very sea whose waves are drowning us. Clearly, though he did not fear Him. Otherwise he would never have tried to run. 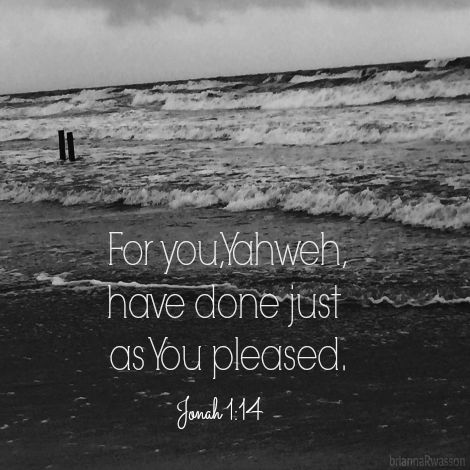 So when Jonah told the sailors who fought for their lives amid the Yahweh-created torrents of the sea that he worshiped/feared God, I have to think he didn’t really mean it.

The pagan sailors, on the other hand, seemed to have fully grasped the power and fear-worthiness of the One True God. In fact, as soon as they granted Jonah’s death-wish, they offered Him a sacrifice and made vows. They worshiped God for real while Jonah merely spoke the words.

But God transformed Jonah’s verbage into an act of obedience and true worship when He led that hungry fish straight to him then swam him back to Ninevah.

Then Jonah, reluctant as he remained, worshiped God by doing what He’d commanded. That’s when we discover what Jonah had really feared.

That’s why I fled toward Tarshish in the first place. I knew that You are a merciful and compassionate God, slow to become angry, rich in faithful love, and One who relents from sending disaster (4:2).

When Jonah saw God pour mercy on the people of Ninevah, he tipped his hand and let us in on the one he’d actually been worshiping all along — himself.

See, Jonah didn’t want the Ninevites to know God’s grace. He didn’t want them to be like him, counted among the children of God. But God’s mercy is for all who will realize their sin and ask Him for mercy. Jonah feared not getting what he wanted so He tried to thwart God’s plan.

But God had His way. He always does. He transforms anyone who will humbly admit they need Him. Even the people who lived in Ninevah. Even Jonah. Even you. Even me.

This entry was posted in Jonah, Transformation Testimonies. Bookmark the permalink.