Posted on March 18, 2019 by everydaywithgodgracechurch

Abraham had left Haran decades earlier with a promise that must have sounded almost too good to be true.  He would inherit land.  He would be the father of a great nation.  And his descendants would become the source of blessing to others.

But shortly after seeing his new real estate for the first time, famine forced him to a neighboring country.  And, as to his descendants, Abraham and Sarah just couldn’t seem to conceive.

Finally, twenty-five years after receiving the promise, with both of them beyond the age of normal child bearing, their son, Isaac was born.  He was a miracle and the fulfillment of a promise.  But then came God’s instruction that would seem to contradict all of those years of struggle and anticipation:

“Take your son, your only son, whom you love—Isaac—and go to the region of Moriah. Sacrifice him there as a burnt offering on a mountain I will show you.”  (v. 2)

Every time I read those instructions, my fatherly instincts kick in.  How could God ask that of any father?  How could any father follow through?  As if to magnify the difficulty, God further describes Isaac as “your only son.”  He was the son of promise that God had in mind decades before.  God goes on to describe Isaac as the one “whom you love.”  Abraham’s attachment to this lad was indescribable.

But Mt. Moriah was also a place of provision.  If God had promised an outcome and commanded an action, He must have a plan that can be trusted.  You see, the instruction He gave Abraham was only a test.  Instead of Isaac, the ram caught in the thicket became the sacrifice.  God provided a substitute…much as He did when Christ went to the cross for us. 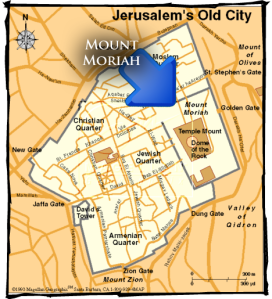 And that’s where we see the events on Mt. Moriah on that day as also a foreshadow of
things that were yet to come.  God, our heavenly Father, would take His one and only Son, the Son whom He loves, and sacrifice Him so that we might live forever with Him.

(By the way, Mt. Moriah eventually became the site on which Solomon’s temple was built.)

This entry was posted in Genesis, Mountaintops. Bookmark the permalink.