Posted on March 19, 2019 by everydaywithgodgracechurch

My wife and I dated long distance for the first two and a half years of our relationship.  In a day without e-mail, Facebook, texting, or even good long-distance calling plans, our communication was largely through handwritten letters.  In those letters, we would often seek to encourage one another with Bible passages.  I can remember citing Genesis 31:49:

“May the Lord keep watch between you and me when we are away from each other.”  (v. 49) 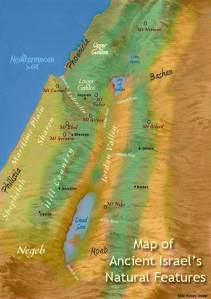 Now, I look back in embarrassment at that!  As I read that verse in its context, I discover that it was a part of a covenant between Jacob and Laban in the hill country of Gilead, in which they expressed their mistrust in one another.

Indeed, the two of them were interesting characters.  Jacob had his own history of deception.  He had taken his brother’s birthright at a vulnerable time in Esau’s life (Gen. 25).  Later, he had stolen his brother’s blessing through a conniving plan that he and his mother had put together (Gen. 27).

But Jacob met his match in Laban.  Jacob wanted to marry Laban’s younger daughter.  In exchange, Jacob agreed to serve his father-in-law for seven years.  Through a convoluted series of decisions made by Laban, however, Jacob had given twenty years of his life in service to dear old dad.

Now, it was time to part ways.  God had made it clear that Jacob was to take his family and his flocks and return to the land promised to his father Isaac and grandfather Abraham.  And so they snuck off.  Soon, Laban caught up with them.  With what must have been tense words, Jacob and Laban made a rock pile that was designed to remind them of the conditions for a covenant:

This “mountaintop” experience in the Bible certainly does not fit well into a stereotype of incredible encounters with God.  It does, however, point to an unfortunate reality.  Some relationships require the establishment of healthy boundaries.  We need incredible wisdom in identifying which relationships those are and what boundaries are both protective and biblical.

This entry was posted in Genesis, Mountaintops. Bookmark the permalink.