Posted on May 13, 2019 by everydaywithgodgracechurch

DAY 1 – CAESAREA BY THE SEA 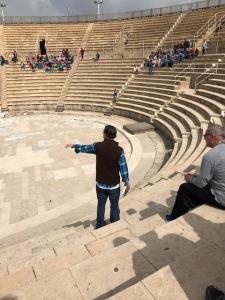 Our trips to Israel often begin with a surprise visit to the sprawling, majestic seaport of Caesarea by the Sea, located on the beautiful coast of the Mediterranean Sea and built by Herod the Great in honor of the Roman emperor. Herod traded political favors with the Romans in order to maintain control over the Jews and insure peace in this turbulent part of the empire. It was a “scratch my back, and I’ll scratch yours” arrangement for both Herod and the Romans.

But Herod ruled with an iron fist. He’s been called neurotic and paranoid. To say the least!  In fact, he had one of his wives and two of his sons killed for treason. One author wrote, “It was better to be Herod’s dog than his son.”  Because Herod had access to Roman military might, he forced slaves to conduct a massive building campaign around the country, including this seaport city, which features the remains of a hippodrome, palace, and a great theater still in use today.

Caesarea is fascinating for Bible students because it also is associated with four main characters whose stories intertwined with the Gospel:  Pilate, Philip, Peter and Paul.  In 1961, archaeologists discovered the famous “Pilate stone” at Caesarea, which provided the first extra-biblical reference to the Roman governor named, Pontius Pilate, who condemned Jesus to death.

Philip was commissioned by God to go to Gaza, met an Ethiopian treasurer on the way, and “told him the good news about Jesus” (Acts 8:35).   After the treasurer was baptized and became one of the first Gentile converts, Philip returned to Caesarea.

Acts 10 describes how Peter received the vision of clean and unclean animals descending from heaven. God interrupted Peter’s prejudiced world view by commanding him to eat of both clean and unclean animals, symbolizing how all people deserve to hear the truth of the Gospel of Jesus Christ.  With that image echoing in his thoughts, Peter received a commission from God to go to the house of Cornelius at Caesarea, the Roman centurion and God-fearing Gentile, who received Christ as a result of Peter’s message.

Later, Scripture tells us that the Apostle Paul appeared before three different political leaders: Felix, Festus, and King Agrippa II in Caesarea.   In each case Paul testified to the power of the Gospel how “Christ would suffer and… rise from the dead…” (Acts 26:23).

Philip, Peter and Paul were missionaries of the Gospel – that Jesus died and rose from the dead so that God could offer forgiveness to all who believe in Him. The same is true for every follower of Jesus Christ. We are commissioned with the good news of the Gospel that transforms people from the kingdom of darkness to the kingdom of light and was proclaimed first to the Jew and also to the Gentile (Romans 1:16).

Today, you will encounter people who are far from God. Every coworker, classmate, friend, relative, and neighbor is headed somewhere for eternity – in heaven with God or in hell apart from Him. Why not determine that you’ll share that Good News every chance you get?

Prayer of reflection:   Thank you, God, that somebody shared the Gospel with me.  Would you help me today to see people through your eyes – headed to eternity with you in heaven or apart from you in hell?

This entry was posted in Acts, Trip to the Holy Land. Bookmark the permalink.