DAY 25 – THE CHURCH OF THE HOLY SEPULCHER 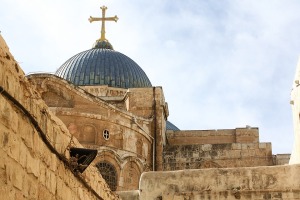 In his book, The Power to Change Your Life, Rick Warren tells about researchers at Cornell University who studied 25,000 prisoners from World War II.  They concluded that a person can handle almost anything if he has hope.  No wonder Samuel Johnson wrote, “The natural flights of the human mind are not from pleasure to pleasure, but from hope to hope.”

It was hopelessness that characterized the disciples of the Lord following his crucifixion.  Yet on that first Easter, Jesus conquered life’s greatest enemy, and they were filled with hope.

A visit to the Church of the Holy Sepulcher depicts that hope.  Pilgrims often stand in line for hours to get a glimpse of Calvary or the tomb which may have contained the body of the Risen Lord.   Those locations are separated by only a few paces, but they reveal the gulf between hopelessness and hope.

I’ve often seen visitors lying on the ground weeping in those rooms.  At first, that seemed like an odd reaction.  Then I realized those are not tears of sorrow.  They are tears of joy and gratitude for all that Jesus has accomplished for us.

At the southern tip of Africa, there is a cape.  When it was first discovered, it was called the Cape of Storms.  Sailors feared to cross it because of the severity of the storms.

Vasco de Gama eventually ventured across.  For a few knots, he encountered turbulent storms, but not for long.  Beyond the storms was a great calm.  From then on, the name was changed to the Cape of Good Hope.

That is what Jesus did to the grave.  In fact, Paul argues that, if Christ is not alive, we have no hope. “And if Christ has not been raised, then your faith is useless and you are still guilty of your sins. But in fact, Christ has been raised from the dead. He is the first of a great harvest of all who have died” (1 Corinthians 15:17,20 –NLT).

If Jesus is not alive, we have no hope for this world. The trajectory for this world continues down a steep decline without any hope for the future.  But Jesus is alive! And “Because he lives, we can face tomorrow.” We can overcome heartache, difficulties, adversity, and even death because the living Christ provides confidence that the grave is not final. He has conquered life‘s greatest enemy. There is hope for this life and the life to come because Jesus lives!

Peter summarizes all this: “Praise be to the God and father of our Lord Jesus Christ! In his great mercy he has given us new birth into a living hope through the resurrection of Jesus Christ from the dead, and into an inheritance that can never perish spoil or fade – kept in heaven for you“ (1 Peter 1:3-5 – NIV).

Prayer of reflection:  Thank you, Lord, that I can face whatever comes in this world because you have conquered Life’s Greatest Enemy.