Posted on November 15, 2019 by everydaywithgodgracechurch

Even though the book of 1 Samuel is, in title, distinct from the book of Judges, its first chapters portray for us the final segment of the period of the Judges.   This period, spanning roughly 350 years from 1398 b.c. to 1043 b.c., was characterized by predictable, repeated cycles . . . the kind of cycles that can easily find their way into our lives if we are not diligent.  From the time of their first judge, Othniel, until their last, Samuel, the Israelite nation found itself reliving the realities depicted in this graphic: 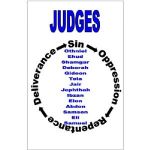 The nation’s experience during the time of Samuel was no different.  From its top (Eli, Hophni, and Phineas) down, the people of God had only a superficial commitment to their God.  In their sin, they had foolishly taken the Ark of the Covenant into battle . . . and lost it to the enemy.  They had turned to pagan idols and the gods they represented, the Baals and the Ashtaroth.  But God demanded their exclusive worship and service.

But it is interesting what fear and suffering will cause people to do.  As the prophet/judge Samuel called them to repentance, they returned to the Lord without hesitation.  And, as a result, God rescued them.  In fact, He even saw to it that the Philistines were driven from the land of God.

Have you ever lived this cycle?  When life is going along well, it is easy to let your commitment to Christ slip.  Slowly but surely, small compromises are often made.  Little by little, the world’s perspective takes on a more and more dominant role in the way you think.  But then, one day, you experience a wakeup call.  Things like difficulty, pain, problems, and trouble cause you to run back to God, calling out to Him for help and deliverance.

Probably all of us have experienced that cycle to a greater or lesser extent.  Meanwhile, God calls us to faithful diligence.  His clear preference is that we experience a different cycle.  He wants you today to remain faithful to Him.  And when the sun rises tomorrow, He wants you to commit once again to that same faithful obedience.

This entry was posted in 1 Samuel, A King is Coming. Bookmark the permalink.